On 25 August, 1916, Sir Ernest Shackleton left Punta Arenas aboard the Yelcho for the fourth attempt to rescue the twenty-two men stranded on Elephant Island.

Following the failure of the attempt to reach Elephant Island with the Emma, Shackleton returned to Port Stanley on 8 August, 1916. Whilst there he learned of the Admiralty’s plans to send the Discovery to Elephant Island to relieve the men. The Discovery was likely to arrive in mid-September, but this was too long for Sir Ernest:

I could not content myself to wait for six or seven weeks, knowing that six hundred miles away my comrades were in dire need.

Shackleton also feared that once the Royal Navy men arrived they would take over command of the rescue mission and he would be side-lined. Shackleton could not stand that idea and he was right, as he soon learned—the Admiralty confirmed that the navy would command the Discovery and the mission. Michael Smith has written that the ‘rescue of his men was a deeply personal quest’ and that Shackleton was then determined to get going before the arrival of the Discovery.

Shackleton then travelled to Punta Arenas, aboard the Emma being towed by the Yelcho, and arrived on 19 August. The stress and strain on Sir Ernest was only growing as the days went by. He had the stalwart of Tom Crean to assist him and Crean watched over Shackleton and even monitored his drinking. Of Shackleton, Worsley wrote that

He was in an acute fever of mind about the condition of his men away in the south, and every day increased that fever. His days were bad; what his nights were like I can only imagine.

At Punta Arenas the availability of possible vessels was not good. Shackleton wrote that there was ‘no suitable ship to be obtained’. Two coastguard vessels—Yanez and Yelcho—were present but neither was fit for the ice. Nonetheless, Victor Speranza, the British naval attaché for Chile, approached Admiral Hurtador, Director General of the Chilean navy, and requested that the Yelcho be released. ‘I begged the Chilean Government to let me have the Yelcho for a last attempt to reach the island,’ wrote Shackleton. Worsley put it honestly when he wrote that the

Chilean Government were aware that they were being asked to lend the vessel for what was little better than a forlorn hope, but they agreed at once.

The steel-built steamer was in no way the right vessel for the job. It was not strengthened against the ice and had not proper heating system. As well as this, the weather conditions had not improved and Shackleton had to promise that he would not take the Yelcho into the pack ice, a promise he knew he couldn’t keep even if there was only a tiny chance of reaching his men. 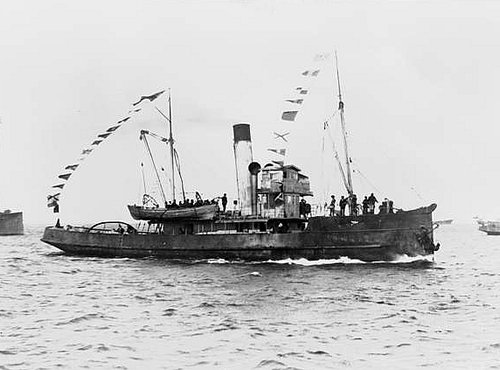 The Yelcho was commanded by Luis Pardo and he chose Romero León Aguirre, who had previously commanded the Emma, as his deputy. Worsley wrote favourably of Aguirre:

He was a most amusing character, completely indifferent to everything but the pleasure that he could extract from the moment, and always in high spirits. He had never seen ice before he joined us, but he simply ignored its presence and carried on as though he were in home waters.

The fateful story of the Yelcho starts in Shackleton’s book, South! thus:

…on August 5 I started south on the fourth attempt at relief. This time Providence favoured us.