On 24 September, 1870, Helmer Julius Hanssen, Norwegian polar explorer, was born in Bjørnskinn, on the island of Andøya in northern Norway. He grew up farming and fishing with his father. Hanssen was an experienced ice pilot, a skill he had learned as a young man while hunting seals around Spitsbergen. In 1897 Hanssen married Kristine Augusta Josefine Berg (1876–1963) and the same year he gained his mate’s certificate in Kristiansund. He soon joined Henry J. Pearson’s British expedition to Novaya Zemlya (Russian Lapland) with the SS Laura. Before he left, he met a man with whom he was to work closely later—Roald Amundsen. Amundsen was also going on an expedition, but he was going south instead with de Gerlache’s expedition aboard the Belgica to Antarctica.

Helmer Hanssen was Second Mate of the ship Gjøa, as part of Roald Amundsen’s successful expedition in search for the Northwest Passage, 1903-1905. Having made camp on King William Island in September, 1903, the expedition was found by a group of Inuit. Although they were armed with bows and arrows, after Amundsen’s men threw their rifles down, the two groups became very friendly. As Amundsen wrote in My Life as an Explorer:

It is remarkable how accurately two men can communicate who do not speak a word of a common language and whose whole experience of life seems utterly separated from each other’s.

Both the expedition and the Inuit saw each other’s equipment and tools, and traded and learned from the other. Learning from the Inuit, Hanssen gained the skills of driving sled dogs. He put this knowledge to great use during his next adventure, attaining Roald Amundsen’s next goal—the South Pole. Hanssen was appointed knight of the Order of St Olav in 1906 for his participation on the Gjøa expedition. When he returned with the Gjøa, Hanssen worked as a customs official in Tromsø, a job which he held for many years, in between expeditions. Going south this time, Hanssen was on expedition again with Roald Amundsen during 1910-1912. Aboard the Fram, Hanssen was employed as an expert dog driver. He was also in charge of navigation, carrying the master compass on his sledge. He was given leave from his customs job and, at the time of departure, left his wife and three children behind. His skills driving the dogs across the Antarctic continent to reach the South Pole were invaluable.

Hanssen was part of the final party to make the dash for the much-sought-after South Pole and he was part of the five-man team that reached the Pole on 14 December, 1911, along with Roald Amundsen, Olav Bjaaland, Oscar Wisting, and Sverre Hassel. As Amundsen wrote in My Life as an Explorer:

With four companions, I reached the South Pole in December, 191 1, camped there for three days, and then explored the neighbourhood of our camp within a radius of ten miles so as to make sure, if our observations were slightly in error, that we should, nevertheless, set foot on the actual site of the Pole. We left the Norwegian flag and the records of our observations in a tent at the Pole and returned safely to our camp. 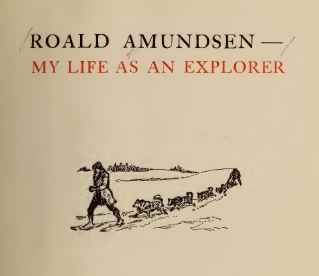 Following the expedition, Hanssen returned home and resumed his work at customs in Tromsø. Hanssen was awarded the South Pole Medal (Sydpolsmedaljen), an award from the Norwegian monarchy, for his part in the Fram expedition and reaching the South Pole. Roald Amundsen recognised the faithfulness and hard work of Hanssen in previous expeditions and in 1919 he appointed Hanssen as Captain of Maud, the ship used in Amundsen’s next expedition in the Arctic regions and through the Northeast Passage in 1918–1920. The expedition departed in July 1918. The plan was to enter the Arctic pack-ice and have the ship drift along with it for as far north as possible. Despite the ship being built to deal with such conditions, the ice became too thick and the ship was caught by the ice for much longer than planned. The crew managed to free the ship in September, 1919, but only for a few days.

Amundsen had several incidents during this time. He fell through the sea ice and was rescued by Hanssen, He broke his arm and was attacked by a polar bear and was only saved at the last minute. At the magnetic observatory, just as he was recovering, on 10 December, Amundsen was badly poisoned by carbon monoxide. This severely damaged his health in the short- and long-term. While the Maud was stuck in the ice near Ajon Island, Hanssen, Wisting and two other crewmembers undertook a dog-sledging expedition to Anadyr near the Bering Strait. The purpose of the journey was to send telegrams for Amundsen to communicate their position at the time. The return journey was approximately 4,000 kilometres and took the four men over six months to complete. By comparison, the journey to the South Pole, of which Hanssen had been part, was around 3,000 kilometres and this took ninety-nine days to complete.

Following two frustrating and unproductive winters in the north, Amundsen decided to journey to Nome in Alaska to repair the ship and buy provisions. At this point, Hanssen was signed off the expedition. Amundsen wrote only briefly of this:

At Nome four [Hanssen, Rønne, Sundbeck and another] more of the boys decided to leave the expedition. This left the Maud with only myself as commander. Dr. Sverdrup the scientist, Wisting and Olonkin.

The relationship between Amundsen and Hanssen had grown tense over the time in the ice. This is perhaps due to the position of Captain going to Hanssen’s head and because he became difficult. After his departure/ dismissal from the expedition, Hanssen worked in industrial gold-digging for a few weeks to earn enough money for a ticket home and then returned once again to his customs job. Although Hanssen is a hero of Tromsø, the legacy of the Amundsen-Hanssen relationship and of the expedition is contested.

Leaving the Maud marked the end of Hanssen’s professional relationship with Roald Amundsen, but he continued to work and explore in the polar regions. Hanssen joined the Oxford University Spitsbergen Expedition of 1924 as a dog-sledge driver and crossed Nordaustlandet by dog sledge from east to west with the expedition leader, George Binney. In 1926, Hanssen assisted the German film company UFA on expedition to Svalbard and Northeast Greenland. He left his customs job in 1928 and worked as ship surveyor at the ship control office in Tromsø until his retirement in 1940.

In 1936, Hanssen’s book, The Voyages of a Modern Viking, was published. It has been noted that Hanssen placed his book in the tradition of existing polar literature, viewing ‘the ups and downs of fate from a grand perspective’. Neither himself nor Amundsen were held to account for their part in negative aspects of their expeditions and their careers were portrayed as happy adventures.

Helmer Hanssen died in Tromsø on 2 August, 1956, and the Norwegian state paid for his funeral at Tromsø cathedral. A monument stands to him in Tromsø. Mount Hanssen, at the southernmost point of Rawson Plateau in the Queen Maud Mountains, is named in his honour. Research Vessel Helmer Hanssen, owned and operated by UiT the Arctic University of Norway, was built in 1988 and designed for geological and oceanographic surveys in both open and ice-covered waters. Originally a stern trawler, the vessel was converted into a research vessel in 1992.